An Optical Power Meter is a device known to feature a calibrated sensor that helps in measuring the display and an amplifier.

The sensor part of the device is typically known to a photodiode that has been selected for the given range of power levels and wavelengths.

On the display screen of the device, the set wavelength, and the measured optical power is usually displayed.

Some of the most common applications for an optical power meter are:

In most cases, the OPM device is used along with a light source to enable measuring of the signal loss in a fiber optic cable or the fiber optical channel.

The source of light can be an LED (Light Emitting Diode) or an optical laser that has been designed to be a part of the test set. Alternatively, the equipment for the communication of light wavelength can also be utilized as the light source.

As optical fiber loss tends to vary significantly with the wavelength selected, the optical power meter should be set for testing the same wavelength being utilized.

Experts recommend that the respective test should be carried out by making use of the same wavelength as the one that you tend to use when it comes to the equipment for light wavelength communication.

For example: if the wavelength of the equipment being tested is operating at has a value of 1310nm, the light source, as well as the optical power meter, is expected to be set to the testing value of 1310nm.

An Optical Power Meter is an invaluable tool when it comes to testing. Make the most of the high-end optical power meters. Special considerations are expected to be made when you are testing with the help of the WDM network.

Yamasaki Optical Technology is a manufacturer and global distributor of Fiber Optic Products. 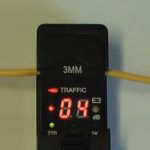 Fiber Identifier a most versatile tool for you to use.Testing